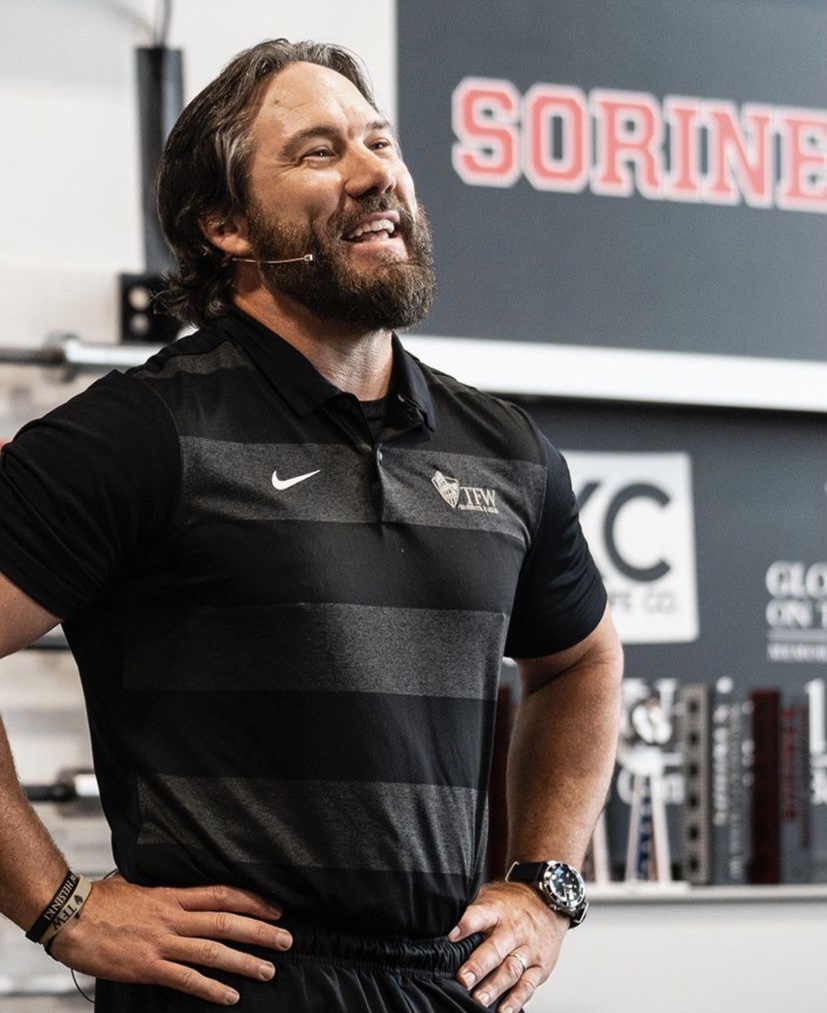 Ever since I entered the “workforce” 25 years ago, when people asked me what I did for a living, I never answered I was a writer.

When I landed in other countries and wrote my occupation on immigration documents, I never penned the word “author.”

If I met a new person, I wouldn’t introduce myself as a professional scribe, and if I presented to groups and businesses around the world, I always forgot to mention I had written a dozen books.

Why did I always leave that part about myself out?

And now looking back on my life, I was suffering from an Identity Crisis.

When I thought about myself, I liked to imagine an athlete more than a wordsmith.  But as I got older and my performance numbers started to decline, I began to identify with my role in the “fitness business” as the head coach of my company, Training For Warriors.  I would sometimes mention I was a speaker too.  But after all the handshakes, introductions, and presentations, I never talked about the thousands of hours I spent writing and editing.

Why did I always leave that part about myself out?

Because I didn’t value my hours writing as much as the ones spent training, coaching and presenting.  I was yet to “earn” that identity.

I blame my identity crisis partly on maintaining high standards.  I have often heard the line “fake it until you make it.”  But I guess for me, I considered myself a fake until I had made it first. Before I believed I had earned a title, I demanded I reach a high level in that craft.

For instance, when I studied judo, I avoided calling myself a “judoka” until I achieved my black belt.

I didn’t label myself as a business owner until I had owned a successful one for years.

I never imagined myself as a professional speaker until I had given 100 paid speeches.

I couldn’t identify with the title “coach” until my athletes and teams had won championships and medals.

I denied myself permission to identify with those things until I felt I deserved it.

But now I think differently and have some advice if you are suffering from your own identity crisis right now– you become the things you work towards long before you recognize it to be true.  Giving yourself that permission of identity will only accelerate your skills and passion faster.

How do I know this?

When I got signed to write my twelfth book, High Ten, I gave myself permission to finally think I was a writer.  And that took my writing to the next level.  Sounds silly right?  Well, you will be surprised how little you give yourself credit for what you have become.  Especially when you start at the bottom.

Perhaps it’s hard for you to admit you’re something when you are reminded of your humble beginnings.  I know that was true for me.  My writing started just like yours probably did.  I learned my ABC’s.  I learned to spell.  Then began a sentence here, and an essay there.  School turned those essays into a report here or  a project there.  I was corrected and shown all my errors with the dreaded red pen.

Those are the usual ways we start in school.  We do our best to understand grammar and punctuation and then attempt to write something entertaining enough about a topic we care little about to get a good grade.

That was the origin story of my writing life too.

But 20 years ago, something changed – I received my first payment to scribble down some words.  Then I began to receive stipends for monthly columns in magazines like Gracie Magazine and Fight!, and became the head blogger for Q&A’s on websites like Elite Fitness Systems and Men’s Health.  I felt the responsibility and power of helping other people with my writing.  This pushed me to improve my writing and learn how to organize my thoughts in ways that could both educate and entertain.

As I was learning and improving my craft, those Q&A’s turned into articles.  And those articles became chapters.  Those chapters were compiled into manuals.  And finally those manuals gave me the confidence to write a book.

In 2002 I wrote my first book, Train to Win, and 2004 I wrote the original Training For Warriors book.  After the success of those two self-published books, things got more serious.  A major publisher, Harper Collins, sought me out and signed me without an agent.  When I asked a lawyer friend whether I should sign the contract, he laughed and said, “They are going to give you money to write a book and you aren’t even a writer?  Sign it!”

So I signed and Training For Warriors was released.  That book went on to be wildly successful and 11 books later, I have sold over 200,000 copies of my books in 6 different languages.  (Important note:  Most authors never sell 1000 copies of a book in a lifetime.

Over that time, I have traveled around the world writing about my adventures.  I have sat and written where JK Rowling penned her original Harry Potter book.  I have visited Ernest Hemingway’s house in Key West and toured where he wrote in Paris.  I read dozens of books about writing from Stephen King’s, On Writing to the classic, The Elements of Style by William Strunk.  I have gone to the book releases of authors I enjoy to ask a question or two about their process.  I have spent time wondering how I can use less commas, incorporate more semi-colons and whether I can write something good enough to warrant an ellipsis.

I didn’t write those things above to impress you, but to impress upon you that until this year of quarantine, I still didn’t think I was a writer!

But now I understand the reasons why it was ok to give myself permission.  I hope this idea will allow you to give yourself permission for whatever you want to become too.

I didn’t write because I had to.  I wrote because I wanted to!  I wrote not for want of money or notoriety.  I wrote because I couldn’t stop from doing it. I wrote for the same reason why I am sitting at my computer and writing to you now: I enjoy it.  And I learned the biggest lesson: people who believe they are something spend their time doing that something.  In my case, writers write.

I understand you may not be interested in writing.  And the point of this email was not to get you interested in my passion.  It was to explain my identity crisis to help you solve yours.  Here are 5 questions that will help.  If you can find the intersection of these five questions, you just might end your own identity crisis and discover how you should be spending your life.  And when you discover your new identity, it will stimulate you to become even greater too.

5 Questions To Solve Your “Identity Crisis”

1.  What is a hobby or pastime that you can’t stop yourself from doing?

2.  What is that thing that you just have to do even if time is limited?

3.  What is that career you would do even if you didn’t get paid money to perform it?

4.  What is your identity associated with that career that you may be ignoring?

5.  What is a title or label you not giving yourself permission to either attempt or become?

Once I accepted I was a writer, I was driven to write something even better than my previous books.  I wanted to improve my skill with words to unravel a great story and teach at the same time.  After I decided to write the sequel to Coach to Coach, I planned and prepared to push like the greats I have read about.  I got my work space ready.  But then I remembered, people who believe they are something spend their time doing that something.  In my case, writers write.

So I got to work.  I dug in writing for 6-8 hours a day for months and then spent another month more of editing.  I suffered.  I sacrificed.  And because I wasn’t unsure of my identity as a writer – I loved every minute of it!  And now I couldn’t be more proud to share what I consider my best writing yet with you.  High Ten is my greatest work yet.

But only you can decide if that is true.

And you can only make that decision if you have read the book.

Since High Ten would also make a great gift for team members and friends, I created a special page that explains everything about the new book and all the bonuses..  This special will only be available until the launch date of July 7th.

Thank you for your help and I can’t wait to hear what you think of the new book.

Throwing you a big High Ten!