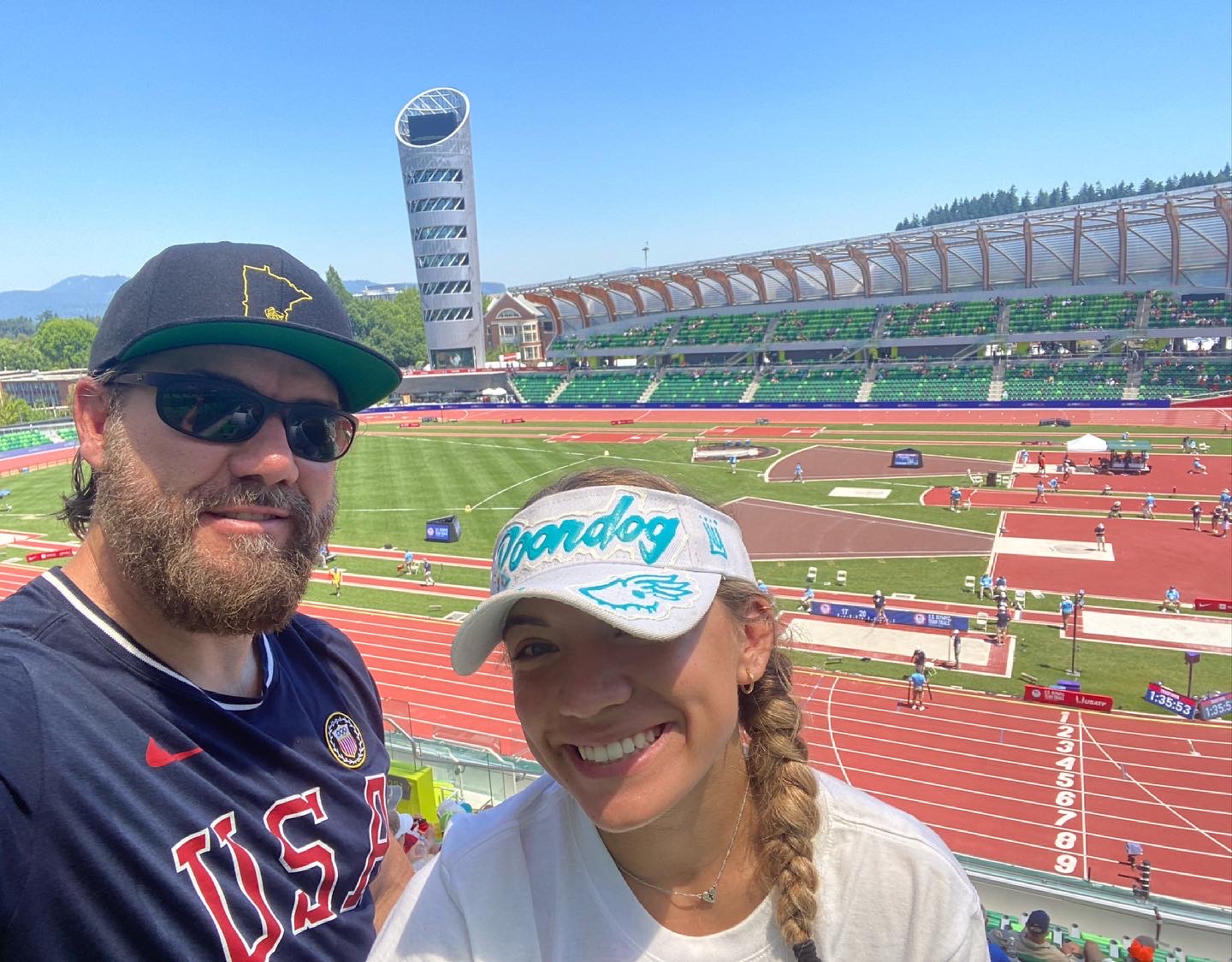 I am writing to you today from Eugene, Oregon – the place also affectionately known as Track Town, USA.

For the last few days, I got to check off a “bucket list” item – I attended the US Track and Field Olympic Trials.  What made me cherish the event even more was I had the pleasure of watching it with my oldest daughter, Sofia.

Back in March, when Sofia officially got accepted to the University of Notre Dame, her mother and I decided to do something special for her.  As her special gift, we got her tickets to the Olympic Trials.  Although she was ecstatic when she found out she was going to see one of our country’s most important track meets, there was more to the story.

I had a secret agenda.

You might think this “graduation” gift was nothing more than the plane flight or the tickets to the venue. After the days she and I spent in the new Hayward Field at the University of Oregon, however, I know this gift graduated her to something different – and much longer lasting than a handful of hours in the seats of a stadium or plane.

I’ll be bold enough to say the gift she received is one every coach or parent should seek to deliver to their athletes or children.  This gift is your responsibility as a parent and coach, yet unfortunately it often goes not given.  And to be clear, this gift has nothing to do with spending money or material things.

Not sure what this gift could be?

Well, to explain the gift, I will use one of the most famous moments in track and field history that happened on May 6, 1954. If you know the date, that was the legendary day in England when Roger Bannister broke the mythical four-minute mile barrier.  If you know the story, at that time it was accepted that breaking four-minutes was physically impossible and if anyone ever did achieve it, they would surely die afterward.

You may have also heard that 46 days after Bannister ran 3:59.4 another man named John Landy broke that record.  A year later, three runners performed the feat in the same race!  As time went on more people began running sub-four-minutes, and now almost 70 years later with the record at an amazing 3:43.13, there have been over 1,400 people who have done it including a 16 year-old has done it, and a 41 year-old too.  Although running an average of 15 miles per hour for four laps seems incredible, now it is not uncommon for high schoolers to do it year after year.

Now back to the gift.

During these Olympic Trials, my daughter got to see the breaking of a World Record by one of her favorite athletes.  As a bonus to seeing something that has never happened in human history, she also got to witness the current world best performances in the same events in which she competes. 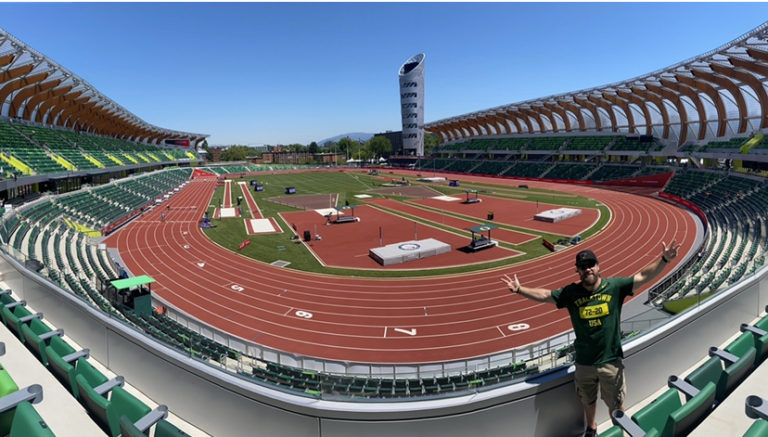 Why was I so excited to have her see those records fall? Because I believe one moment can change a mindset, and one change in mindset can change everything. The gift she received had nothing to do with sitting in the stadium; it was about the effect from what she witnessed in the stadium.  The gift wasn’t about watching the changing of a record; it was about the changing of her mindset from watching!

For 2,000 years men and women had been running the distance of a mile.  Over those two millennia, no one could ever do it in under four-minutes.  Then after Sir Roger’s famous run in 1954, something “remarkably” changed and people began to beat the mark.

Did humans physiologically somehow make a leap?  No.

Could it all be explained with better training, nutrition and equipment?  Perhaps those played a part, but I think it had more to do with a better attitude.

And that change was a result of Sir Roger’s famous run on the Iffley Road track.  What was the gift future runners received from Roger Bannister when he broke that record?

The gift was a radical shift in mindset – Every runner alive changed their belief about the obstacle!   Runners around the world immediately moved from doubtful to certain it could be done. That certainty helped their minds change overnight.

Those athletes went from Impossible to I’m Possible!

So why was I so happy to make the sacrifice and take the trip to Oregon?  Because I was hoping my daughter would experience something that would make a radical shift in her mindset.  And as my daughter watched World and American records fall, I know the change took place.  After discussing the meet with her, I know her attitude toward track is different – what she limited herself by believing what was possible has changed.

The gift of possibility is one we should all share.

Unfortunately, I often see parents and coaches more focused on what is not possible for an athlete or child.  As a parent, leader or coach, it is not your job to create limits, it is to stretch them!  You are not there to spend time coming up with all the reasons why something can’t be done – you are there to create or find solutions how something can!  Before you can help someone change his or her view on the impossible, it helps to get good at it yourself.  Here are 10 questions to ask yourself that may help you break your next record:

What is your current ”four-minute mile?”

What is the obstacle that is currently holding you back?

What is a goal you have a hard time imagining you can reach?

What could be possible if you had a higher level of “certainty?”

Which is your biggest limitation – physical or mental?

What would be your next step if you knew you could not fail?

When would be the best time to take that step?

Who could you meet that might help to change your mindset?

Where could you go that would help you to stretch your limits?

What could you read to give you more tools to succeed?

If you read the final three questions, you’ll see making a breakthrough may have to do with the places you go, the people you meet and the books you read.  After all, changes in mindset are easier to produce and more permanent when you invest your time around great people or into something awe-inspiring.

Of those three, I think the easiest way to change your mindset is to read great books.

If one of the obstacles holding you back has to do with the current culture of your business, family or team, I have another gift to help you overcome it.  My new book, High Ten: An Inspiring Story About Building Great Team Culture contains all the tools I know to improve your leadership skills and shift your mindset to overcome your “impossible’s” of culture.

And if you enjoy my emails, I promise this easy-to-read story is my best yet!

Since people who ordered are already receiving their copies of High Ten, this is the last week for my special offer.

If you have been waiting to take advantage, Don’t Miss Out!

Here’s The Link To My $500 Special Offer

Throwing you a big High Five, 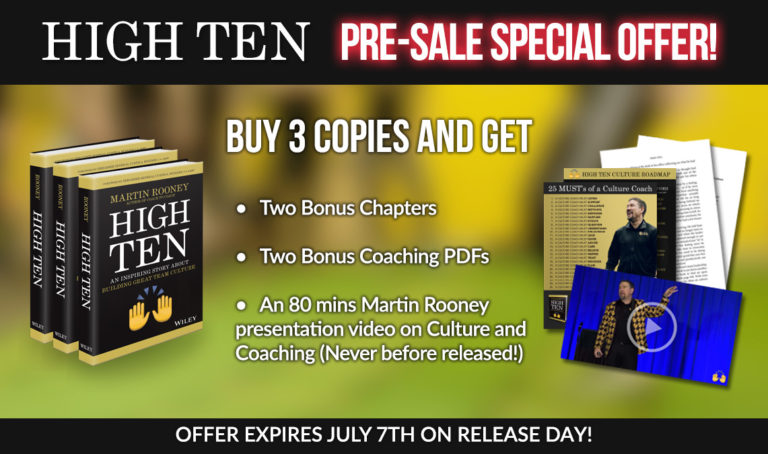