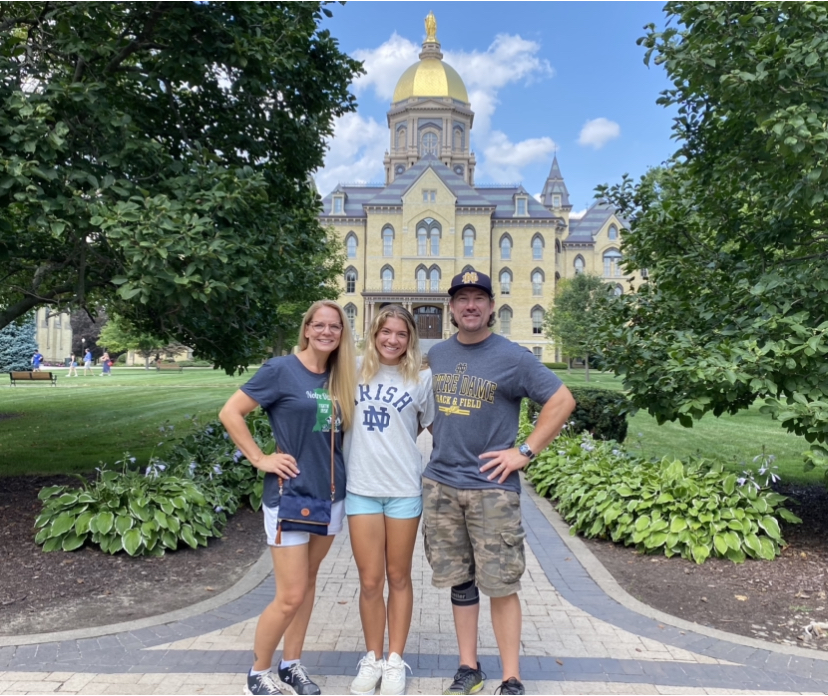 The combination of joy and pain I felt this week taught me a lesson:

Your human experience would not be complete without sorrow and suffering or levity and love.  Along your journey, if you are lucky, you’ll experience the richness of all those emotions in the same moment.

When I faced my moment in South Bend, Indiana, although I’ve been preparing for the last 18 years, I wasn’t ready.

Entering into Welcome Week at the University of Notre Dame, I was unprepared.  After all, I’d never “dropped off” a child at college before.  My lack of preparation, however, had less to do with what my wife and I forgot and more about what we didn’t know.

Of all the “first-year” things that were recommended, from clothes to coffee cups or towels to toiletries, we quickly learned from my daughter’s room, drawers and closets quickly filling that we brought more than we needed.  In fact, the only thing we forgot was a mattress topper which we snagged while joining other parents during their last-minute trips to Bed, Bath and Beyond.

Although preparing and packing our car before we left for Indiana was time consuming; it was also easy.  After all, parents were given a detailed list of everything to bring.  Beyond those material items was where my inventory came up short.  As the days ticked by, I recognized my emotional bags weren’t fully packed.  While the weekend continued, I realized there was another list I was missing.  This list didn’t concern what you needed when you “showed up” –  the list was about what you needed after you left.

Everything during 2021 Welcome Week exceeded my expectations.  The campus was more beautiful than I remembered.  The tours kept you moving, but still allowed enough time to explore some landmarks on your own.  My daughter’s room was bigger than we were fearfully led to believe.  The band-led pep rally in Notre Dame Stadium left me with goosebumps, and the medallion every student was left with for the first time in school history was unexpected.  But perhaps what most surpassed my outlook was the quality and compassion of the unified message of the presenters.

“If you want to belong, you have to learn the myth.  You have to wrap your heart and mind in it.  You have to believe that the merest rocks of the place tell a story…Behind the myths is a cast of hundreds working in loyalty for the Notre Dame of their dreams…”  Rev. Robert Griffin, C.S.C.

Over three days, we heard from the university president, heads of departments, dorm rectors, resident assistants, deans, provosts, athletic directors and coaches.  Being a professional speaker, I was impressed by the way each one of these people entertained and educated the crowd.  As the lessons within each speech kept adding up, I realized these messages all contributed to a greater whole.  The wisdom within those speeches composed the final list I was missing.

The parents were tricked by Notre Dame.

I thought only our children were there to learn, but the parents were the first to receive some lessons.  Here are the five most powerful lessons I learned from Welcome Week about how to be a better parent:

Notre Dame’s president, Rev. John Jenkins instructed that we should not demand our child chase a Grade Point Average.  Instead, he reminded me to inspire and support my child to develop a Greater Passion Awareness.  I needed Father Jenkins’ reminder that what you will do in your life will be more important than chasing a grade.  So much of the last four years was spent helping my daughter build a resumé and prep for standardized tests that I often forgot to listen for her true “calling.”  The speakers throughout the week reminded me a calling is more important than a job, and a calling is not what you are learning.  It is developing a love for what you are learning.  Since your education impacts your contribution after college, that impact will surely be greater if it’s spent pursuing your life’s passion.

As George Howard, Professor of Psychology at Notre Dame once said, “The ultimate goal of a liberal education is not to get a better job.  Rather, it is to become a better person, to better know thyself.”

2.  Expand Your Definition of “Family”

As I felt the warmth and authenticity of the people around campus, I learned your family is more than the people under your roof.  Love will extend further than your four walls when there is also faith, hope and trust.  A big part of your role as a parent is to make sure you place your children in environments led by people you trust.  That trust is more strongly built when others take responsibility.  Every speech reminded me that everyone at the university was ready to accept responsibility for the well-being of my child.  Meeting the women who would be in charge of her residence hall and having a nice dinner with our daughter’s roommate and her parents only made me feel more confident about leaving her with new family “under the dome.”

3.  Allow Them To Struggle

I have to confess.  Calling me a helicopter parent probably wouldn’t be far from the mark.  Maybe this is a common style for parents today because everywhere I looked during the weekend, I saw parents doing what I was doing – circling their children, who obviously seemed ready to be rid of them.  My explanation for my behavior always began with good intentions – I wanted to make things easier; I wanted to remove my daughter’s struggle.  As I was reminded during the presentations, my daughter’s struggles will be necessary for her growth.  I have to let her take them on herself, and know some “bad” things may happen for her to ever to embody what founder Father Edward Sorin once dreamed for Notre Dame in 1842, “to be one of the most powerful means for good.”

Another profound lesson of the weekend came from Director of Athletics Jack Swarbrick during his presentation to the student-athletes and their families.  As a parent of college kids himself, he said he had two important pieces of advice.  When the parents leaned in to accept the message, he simply exclaimed, “Leave!”  Then he followed with his second bit of wisdom, “And have a plan for how you’re going to leave!”  Although these tips got a laugh from the crowd, as my time in South Bend dwindled, I understood their value.  Jack knew we would all have to soon let go, and that release will go more smoothly if you had a plan how to do it.

During the weekend, we got the luxury of hearing from the Director of Campus Ministry, Rev. Peter McCormick twice.  He delivered an inspiring talk about personal growth to all the incoming athletes, but it was something very subtle he mentioned during his homily at the final mass that created an immediate and lasting paradigm shift in my parenting.  He mentioned that when he was younger and told his mother he would be leaving, she responded, “Well Pete, I didn’t raise you to live in our basement forever.”  I had an epiphany and realized my ultimate role as a parent was to prepare my daughter to take on the world without me.  Father Pete’s advice to imagine her as “being sent” versus “leaving” helped make accepting my role less difficult.

Even though all those words of wisdom, the excitement of readying my daughter’s room and buying too much Fighting Irish gear at the bookstore helped mask what lay ahead, nothing could prevent the inevitable.  The moment we dreaded was upon us – it was time to say goodbye.

The days leading up to this moment were some of the most emotional of my life.  Of the ranges of emotions a father can experience, I felt them all. There was anticipation, excitement, and pride mixed with fear, worry and doubt.  I repeatedly alternated between happiness and sadness which put me in contrasting states of calmness and stress.  At times I felt useful and needed and then others completely awkward and out of place.

As we walked arm in arm toward the Golden Dome where we had planned to say goodbye, no matter how I tried my best to cram in my last bits of fatherly advice, I still had that feeling I was forgetting something.

At a time where you should be savoring your last moments together, I was disappointed in my ability to stay present because I was jumping back and forth from the past to the future.  As we walked from the final mass in the football stadium and made our way to the quad, I spent time reflecting on her first steps and wondering where her feet would someday take her.   I couldn’t help myself remembering all her “firsts” and then jumping ahead to her “nexts.”

Perhaps the most difficult feeling to experience was confusion.  Sending your child away is a parental paradox – you want to hold on so tight, but you also know you have to release your grip.

Maybe that’s why a great thing to plan into your goodbye is a hug. 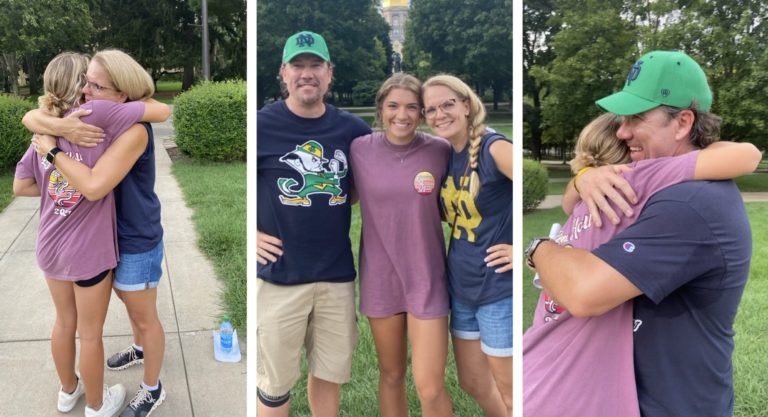 A hug is a chance to hold a person extra tight to show them how much you love them, and then reaffirming that love by letting them go.

People warned me about this moment for years.  I wish I could say the week prepared me to be nothing but brave – but I was scared too.  I did my best to hold it together and appear strong, but I would be lying if I didn’t tell you demonstrating the strength of your love for someone might be by crying just a little.

But after that moment of tears, I could only smile. As you can see in the photo above, because I’ve always been so proud of this kid, the final emotion I left her and Notre Dame with was pure joy.

I am hopeful that you file away some of the lessons and this message inspires you to hold someone close to you a little tighter today.